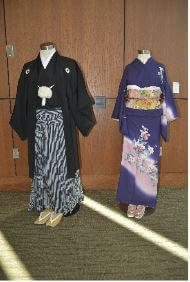 The word Kimono simply means “things to wear” and is the traditional clothing of Japan. It is a long robe with wide sleeves worn as an outer garment. A sash called an Obi, complements the kimono. The Obi is worn around the mid-section of the body. 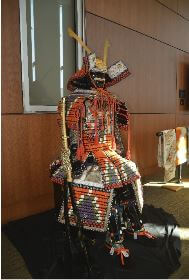 The Samurai armor on display in our exhibit area is a replica of traditional Samurai armor worn many centuries ago in Japan. The manufacturer of the armor, Marutake Sangyo, is Japan’s, and the worlds’, the premier producer of fine Samurai Yoroi Armor. Located in Satsuma-Sendai city of Japan’s southwestern Kagoshima prefecture, the firm’s reputation for creating products of unparalleled quality has given them more than a 90-percent share of the Japanese armor market.

The United Nations Educational, Scientific and Cultural Organization (UNESCO) seeks to encourage the identification, protection and preservation of cultural and natural heritage sites around the world that are considered to be of outstanding value to humanity. UNESCO has recognized a number of these historical sites throughout Japan.

The dioramas on display at the Festival this year are depictions/models of some of these famous sites in Japan.

Ikebana Display by the Sogetsu School

Ikebana is the art of Japanese flower arrangement. Take time to enjoy the Ikebana display in the lobby of the Carlsen Center provided by members of the Sogetsu School.

Ikebana Exhibit by the Sogetsu School of Ikebana

Learn about the Japanese art of flower arranging (Ikebana) from masters of the Sogetsu School and their students. This exhibit of the beautiful art of Ikebana will give everyone an opportunity to see both traditional and contemporary styles of this distinctively Japanese art form. Members and students of the Sogetsu School will be on hand at the exhibit to answer questions and explain the techniques used so that attendees can better appreciate this increasingly popular style of flower arranging.

All day in the second-floor lobby of the Carlsen Center the Bonsai Society of Greater Kansas City has been in existence since 1968 and was formed to promote the interest and appreciation of the art of bonsai through education, training, information and exhibitions.

Torii Gate Entryway to the Festival 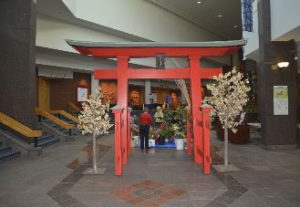 The large Torii Gate that leads all visitors into the GKC Japan Festival is a depiction/large model of one of the most famous Torii Gates in all of Japan at the Itsukushima Shrine near Hiroshima. The Torii gate at the Festival is approximately 14 feet tall and the top crossbar is about 16 feet long.