Learn from Mrs. Stroder and Ms. Fraley all about traditional Japanese Kimono and Yukata. Also, you will be able to see them demonstrate what is involved in putting on a Kimono or Yukata.

The Japanese Kimono is deeply integrated into Japanese history and culture. After a decline in popularity following the Meiji Restoration and WWII, the kimono is now making a resurgence in popularity in Japan and around the world. While dressing her models, Iijima-san will provide instruction and interesting details about how to wear the kimono in English. 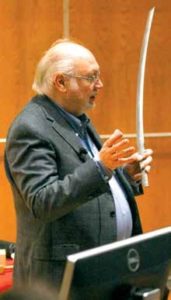 In Mr. Brigance’s opinion, the Samurai sword is one of the most unique and in-depth art objects in the history of the world. Through the fog of antiquity, there remain Three Sacred Treasures of Japan, which are still held in reverence by the people of Japan to this day, they are the Sacred Mirror, the Coma-Shaped Beads, and the Samurai sword.

Mr. Brigance has studied and collected Samurai swords for over thirty years. He is a member of the JSSUS, Japanese Sword Society of the United States. He is one of the original members of Florida Token Kai; which is an organization established in 1990, devoted to the study of Samurai swords.

March 11, 2019 marked the eighth anniversary of the triple disaster in Japan: 9.0 earthquake, followed by a devastating tsunami followed by a nuclear disaster created when four of the six nuclear reactors at Fukushima failed as a result of both the earthquake and tsunami. Learn more about what happened and some of what is happening regarding cleanup and restoration.

Pilgrimage: A Journey to the 88 Sacred Places of Shikoku – William Ash

The island of Shikoku is home to Japan’s most famous walking pilgrimage. For centuries, pilgrims have been taking this 700-mile path for healing, solace, and enlightenment. Join us for a pilgrim’s view of the culture, rituals, and people of this remarkable journey. This is a story of pilgrims, monks, locals, charlatans, fugitives, and ghosts.

Civility and Savagery: The Duality of the Samurai – J.M. “Tora” Lawson

This lecture focuses on Samurai culture throughout the various eras leading up to their legacy in the new modern era.

Yōkō Agriculture: A Spiritual Dialogue Between Heaven and Earth, Nature and Humans – Koji and Susan Nakao

Are you a young person concerned about the future of this natural world and our food supply? Are you a farmer seeking ways to feed an ever-growing population? Are you a scholar or scientist seeking solutions to local or global environmental problems? Whether you live on the 20th floor of an urban high-rise, in the suburbs, or on a farm, you can grow your own fruits, vegetables, and grains and can create an enduring spiritual dialogue with Heaven, Earth, and Nature.

Are you thinking about traveling to Japan? Come to this lecture to learn how to get there, where to go, sites that you should not miss, exchanging money, riding the Shinkansen (bullet train), how to get around and many more topics.

Nihonga is based on a painting style that has evolved over a thousand years. The materials used are traditional elements developed during the long history. Nihonga uses very unique materials and many are natural. The process of creating the traditional materials is very time-consuming.

This workshop will explore the Japanese garden making process, maintenance issues and ideas for creating a Japanese garden by Koji Morimoto. His 20 years of design knowledge and experience will help you to have a dream garden of your own.

“Miniature Trees”: An Introduction to the Ancient Art of Bonsai – Kathy Schlesinger

“Miniature Trees”: An introduction to the Ancient Art of Bonsai. The translation of Bonsai simply means “planted in a shallow tray”. However, Bonsai is one of the oldest forms of ‘living’ art as trees and plants are grown in containers, artistically designed, in the Japanese style.

In this panel, Joshua Murphy will take a look at Japanese Gameshow and Variety Shows and their effect on the American television landscape. Takeshi’s Castle, Ninja Warrior, Ultra Quiz, Shark Tank and America’s Funniest Home videos are some of the shows that will be discussed and seen in this panel.

Bushido’s role in Japanese society became a topic of discussion both within and outside of Japan as the country openly engaged with other nations. This presentation will focus on the relationship between bushido and modern Japanese baseball, which traces its roots back to cultural exchanges between Japan and the United States in the late 19th century.

This Zen meditation workshop will provide participants with an explanation of breathing exercises and meditation technique. Once we have gone over the basics, we will engage in a brief silent meditation practice followed by discussion.