Like Karate, techniques are practiced to handle attacks of both an armed or unarmed nature. The techniques in Aikido contain mostly blocks, locks and takedowns by the proper use of grappling techniques that are applied by trying to harmoniously get in tune with the attacker’s efforts. 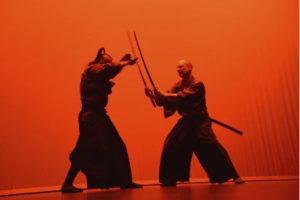 The art of Kendo derives from sword skills developed by the samurai of the 12th century called Kenjutsu. During the 14th to 16th centuries, accomplished swordsmen opened schools to teach the art of the sword. The more peaceful Edo period (1600-1868) saw the moral and spiritual elements of the practice come to the forefront, and the art of Kenjutsu continued.
Kendo practitioners train using a bamboo sword called a shinai. They wear a helmet and body armor called bogu that allows for full-contact sparring with low risk of injury and gives the practitioner the ability to dynamically adjust to real speed attacks to a limited number of targets in a competitive environment. The Kendoka uses spirit, sword and body in unison to successfully complete an attack against the opponent

Shindō Musō-ryū most commonly known by its practice of jōdō, is a traditional school (koryū) of the Japanese martial art of jōjutsu, or the art of wielding the short staff (jō). The technical purpose of the art is to learn how to defeat a swordsman in combat using the jō, with an emphasis on proper combative distance, timing and concentration. The system includes teachings of other weapon systems, which are contained in Shintō Musō-ryū as auxiliary arts (Fuzoku ryuha). The school is sometimes abbreviated as SMR. The art was founded by the samurai Musō Gonnosuke Katsuyoshi around 1605, in the early Edo period (1603–1868) and, according to legend, first put to use in a duel with Miyamoto Musashi.

Kenjutsu is the umbrella term for all (koryū) schools of Japanese swordsmanship, in particular those that predate the Meiji Restoration. The modern styles of kendo and iaido that were established in the 20th century included modern form of kenjutsu in their curriculum, too. Kenjutsu, which originated with the samurai class of feudal Japan, means “the method, technique or the art of the sword.” This is opposed to kendo, which means “the way of the sword”.

Visit this page to read up on the JCCC "Prop" Weapons Policy, First Aid, Lost and Found, What do to if there is an emergency, and how to identify committee members and volunteers.

We want everyone to enjoy the festival!